Zimbabwe Shona Stone Sculpture is obviously sculpture in Stone only. Zimbabwe literally translates to “large house of stones,” in the Chishona language, spoken by the largest ethnic group of people the Mashona in Zimbabwe, the former British Colony of Rhodesia. So then the SHONA are a tribe, after whom this art form is named.

To the far south of the country as you head towards Nelson Mandela’s South Africa, are found the Great Zimbabwe ruins, a massive Royal City Fortress that is built with finely cut granite “bricks” without mortar; and that tower fifty feet high in places, and are estimated to be between 900and1200 years old. There you have it. The sculpture derives its name from the country, the majority tribe, their heritage and ancient tradition of working stone.

Colonial histories are minefields of the good, the awful, the bitter: a veritable Pandora’s box some of whose contents are actually O.K. Many outsiders, Europeans from various countries (the British for instance) were of great and beneficial influence on the sculpture of Zimbabwe. Some outsiders go as far as to claim the distinction of, and take the credit for, having started stone sculpture in Zimbabwe. Others even make grander claims. The truth is that carving in stone in Zimbabwe is older than the advent of the white man and his subsequent visits to that land.

The stone sculptors of Zimbabwe use different types of rock. Serpentine is overwhelmingly the stone of choice. However spring stone, an intensly hard rock, carries greater prestige, particularly among the more prominent artists. Serpentine comes in many different forms, colors and degrees of hardness: black, green, yellow, brown, gray and mixtures of different colors in the same chunk of stone. The artists also work in the very rare semiprecious verdite, which is highly prized and is predominantly green. Verdite is also found in various shades of bronze and brown. Rapoko and soapstone are also used as is granite, along with some exotic types such as leopard rock

Zimbabwe sculptors have achieved world wide fame. They continue to exhibit their works in many countries of the world: in major galleries, in museums such as the Museum of Modern Art and the Rodin museum in France. Collectors of Shona sculpture include world class names like the British Royal Family and our next door neighbor. Many of the sculptors are in fact of the Shona Tribe. But others are from many other tribes, countries and places. You will find the occasional German, Asian, Australian, South African and even American at work training in workshops with master craftsman in Zimbabwe itself and abroad.

Important Galleries in the U.S., Canada, Australia, all over Europe and elsewhere have achieved importance from showing Shona sculpture alone. Books in English, German, French, and other languages have been written on Shona Stone Sculpture. We at Mhiripiri Galleries take pride in our intimate knowledge of Zimbabwe, in our relationships with the artists and their works. We have many different books on Shona Stone Scultpture in our inventories. Owners Rex Mhiripiri & his wife Julie travel to Zimbabwe to select and buy the pieces we carry in our Galleries.

We take pride in offering a service that few can equal outside of Zimbabwe. Our son Mudzingwa has gained expert knowledge in the behavior and qualities of the different types of stone used by the artists of Zimbabwe. Mudzingwa will “fix” chips and scratches in the rock so it is tough to tell where the damage had been 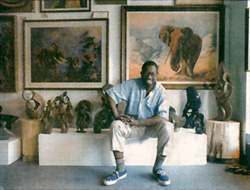